Each month a team member of Metro will be writing a movie review to share with you. And this month team member Merryn Schmidt has reviewed 'The Cup'. Director – Simon Wincer, Starring - Stephen Curry, Brendan Gleeson, Shaun Micallef & Daniel MacPherson.

'The Cup' is based on the true story of champion jockey Damien Oliver and his inspirational ride to win the 2002 Melbourne Cup. Damien (Stephen Curry) crosses the finish line onboard horse 'Media Puzzle', and salutes the heavens as a gesture to his older bother, Jason, who died tragically less then a week prior, in a track accident.

Unfortunately, ‘The Cup’ is not going to stop the nation as the actual race does, but it is certainly an entertaining and enjoyable flick. As the film is set in Melbourne, I appreciated the familiarity of locations such as the Yarra River and Flemington Race Course and the infusion of original photographs and film footage of the Melbourne Cup history over decades.

'The Cup' is a little slow ‘out of the gates’ and moves slowly to give an insight to the danger, the early starts, the half starving themselves, and the dedication jockeys, trainers, strappers and the like give to their careers, all so we can be enchanted by these majestic animals as the thunder down the track for our entertainment. 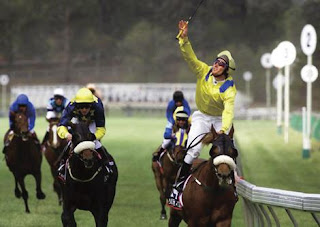 Released with perfect timing, during the Melbourne Spring Racing Carnival, ‘The Cup’ may attract good odds, but I have to say it is not a must see on the big screen. When you do see this film be warned you will require a tissue or two.
- by Merryn Schmidt
Posted by Metro Property Management at Monday, November 21, 2011 No comments: