Each month a team member of Metro will be writing a movie review to share with you. And this month team member Erin Cheasley has reviewed 'Immortals'. Director – Tarsem Singh, Starring: Henry Cavill, Mickey Rourke, John Hurt & Stephen Dorff.


The first thing that comes to mind when you see the trailer for the movie is that it is another 300 movie take off, apart from both being the sword and sandals genre and shirts were optional the director for ‘Immortals’ had a lot more visual tricks up his sleeve and took another approach with the Greek Myth concept, quite a comparison to 300.
Immortals definitely portrays a storyline of a battle between good and evil. Evil King Hyperion is leading his army of murderous mask wearing villains across Greece searching for the magical bow that will free the imprisoned Titans so they can attack the gods. Whilst the hero Theseus who is displeased by King Hyperion’s attack is going on the quest to obtain the magical bow himself, and in the end finding courage and leadership abilities within him to lead his forces of good against evil, which eventually wraps up into one big battle. A highlight of the movie are the action sequences, the Director really captured a level of gore and violence that will have anyone’s jaws drop using slow motion action, it will not only give you chills but have you at the edge of your seat.

This is an age of myth, a world where the gods are real, people have visions of the future and magic exists so this movie is allowed to look weird, mystical and over the top. If Greek mythology tickles your fancy then this is a movie I would recommend. Having a keen interest for Greek mythology and the way this movie used every aspect of what Greek mythology is, I found the movie Immortals to be a worth look (and so to the shirtless men) and it maybe even better than the movie 300. 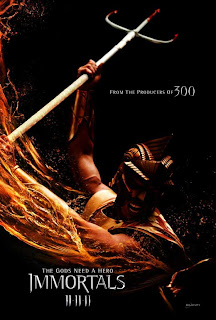 Posted by Metro Property Management at Thursday, December 15, 2011 No comments: