Each month a team member of Metro will be writing a movie review to share with you. And this month team member Tamasan Freyer has reviewed 'Ted' Directed by: Seth MacFarlane, Starring: Mark Wahlberg, Mila Kunis, Seth MacFarlane & Giovanni Ribisi

If you thought the 2009 smash hit ‘The Hangover’ was the 'bees knees', then you sure are in for a roller coaster of a giggle with this year’s most anticipated comedy ‘Ted’.  Starring Mark Wahlberg, Mila Kunis, and the directorship and voice of Seth MacFarlane, this epically funny film follows the story of John Bennett (Wahlberg) and his real life teddy bear, Ted.

When eight year-old John’s wish for his bear to come alive is miraculously granted, they both embark as “thunder buddies for life”. The pair are inseparable, especially when it comes to beer, bongs, and Flash Gordon.

Every bloke in the cinema roared with laughter during the poignant moments when Ted and John sing the Thunder song with a fart noise to finish, and when Ted makes suggestive use of his supermarket checkout scanner to impress a co-worker, and of course when Ted hits a parked car because he was “sending a Tweet”.

What is so refreshing about this film is that both women and men, young and old, could all share in the laughs whatever the joke entailed. MacFarlane’s humour is so unrestrained and so crude that there is no room for being offended. Every audience member understood from the very start that this was a space for laughing, and being open, and embracing one’s inner immaturity (which is not as ‘inner’ for some).

When John’s long term girlfriend Lori (Kunis) insists that it is time for Ted to move out so that John can grow up, John struggles to be the responsible 35 year-old. He can’t help but ditch Lori’s work party to attend Ted’s wild beer-infested house bash attended by none other than Flash Gordon.
Here we see the party that may just have been the inspiration for the ‘The Hangover’, inclusive of a crazed duck, an irate neighbour and one helluva brawl. John’s revelation to Ted that he has “lost everything” after Lori walks away is so profound that the audience is silent for the very first time.

Ted showed us just how hard it can be for our husbands, boyfriends, or brothers to conform to our ‘responsible’ expectations, and cross over to the land of adulthood when marriage comes into view. I couldn’t help but stare at my twenty-five year old partner and think, I have to wait TEN YEARS for you to learn not to make fart noises in the supermarket line??! And for the guys, they could heave a collective sigh of relief that they weren’t the only ones still fantasising about sinking shots with a childhood action movie star.

Watching Ted in a booked out theatre of almost three-hundred people, we all cried with laughter, and laughed even harder at those who couldn’t control their snorts and hysterical giggles. More importantly however, we could  all relate to the film, and celebrate the fact that there is a kid in all of us, no matter how old or how young. 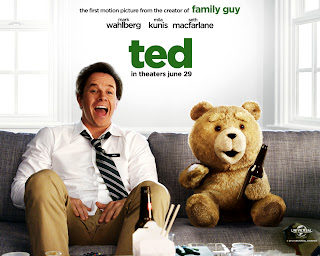