Each month a team member of MetroPM writes a movie review to share with you. And this month team member Alice Connaughton has reviewed the movie ‘The Lone Ranger'. Directed by: Gore Verbinski Starring: Johnny Depp, Armie Hammer & William Fichtner.

I walked into the movies expecting to be wowed, but to be honest the previews wowed me more than watching 'The Lone Ranger'.

2 hours and 15 minutes into the movie and I wasn't impressed. Yawning, checking my watch as to when it may end and wondering what the jokes where all about. I kept looking around seeing everyone else heavily involved in the film. Being the youngest in the cinema, I felt that 'The Lone Ranger' was perhaps directed at 'baby boomers'.

Taking my dad along with me, I could see he was thoroughly enjoying it. "To get an appreciation of the movie you really need to be aware of the Lone Ranger TV series",  Dad stated at the conclusion of the film. He also went on to say, "I felt that it was like a 'send up'. It took a comical look at the Lone Ranger and if my brothers and I all went together it would be a night full of laughter and enjoyment".

Action packed, comical, stupid, questionable, confusing and funny are all words I would use to describe the movie. It was a story (in my eyes) that didn't really go anywhere. Going for too long I felt it could have been reduced and parts of the film could have been cut out.

I personally wouldn't recommend this film, but if you asked my dad he would. 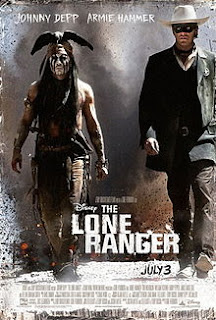