Each month a team member of MetroPM writes a movie review to share with you. And this month team member Merryn Schmidt has reviewed the movie ‘Now You See Me'. Directed by: Louis Leterrier and Starring: Jesse Eisenberg, Mark Ruffalo, Woody Harrelson, Isla Fisher, Dave Franco, Michael Caine & Morgan Freeman

'Now You See Me' is a star studded movie including, Jesse Eisenberg, Woody Harrelson, Mark Ruffalo, (Aussie) Isla Fisher, Michael Caine and my all time favourite actor Morgan Freeman. Right from the opening scenes you are captivated by the wonders of magic and illusion, as you are very quickly introduced to the four main characters, but beware as; "The closer you look, the less you see".

Four unrelated magicians answer an intriguing  invitation, from a mysterious source, 12 months later,  they return to the stage as 'The Four Horseman'. Performing to sold out audiences, 'The Four Horseman' perform the perfect bank heists, but not for their own financial gain.  It is the audience who financially gain from these illusions, in a modern day 'Robin Hood' style.

FBI and Interpol Agents are constantly made to look the fools, as they endeavour to solve these unexplainable crimes, without admitting to the power of ‘magic'. Of course there are twists and turns, but this cleverly made movie will keep you entertained and guessing to the end.

I took my 3 teenage children with me to see the film, and we were all captivated from beginning to end. Part of what appealed to me, apart from the awesome cast, was that there was no extreme violence or coarse language, just good quality entertainment.

I highly recommend seeing ‘Now You See Me’ and give it a 4 Star review! 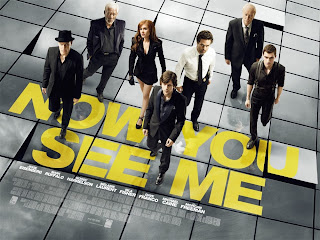